Measuring The R-value of Reflective Insulation vs. Fiberglass

FACT #1: The R-values of reflective insulation and mass insulation are based on the same fundamental equation: The ability to stop heat transfer.

FACT #2: Reflective Insulation is a system that reduces the transfer of heat across air space by the use of two surfaces having high thermal reflectance and low emittance (typically metalized film) + an inner substance + trapped airspaces. U.S. Department of Energy: "Reflective insulation incorporates radiant barriers -- typically highly reflective aluminum foils -- into insulation systems that can include a variety of backings, such as Kraft paper, plastic film, polyethylene bubbles, or cardboard, as well as thermal insulation materials."

Measuring The R-value of Fiberglass Insulation

FICTION: The posted R-value of fiberglass and cellulose insulation

The parameters of the R-value test for fiberglass and cellulose insulation involve no moisture or wind. You might be saying, "That's ridiculous. That can't be. Those aren't the conditions of my home or building."

Even in the desert there is humidity. All buildings and houses leak air and water. Water vapor from the atmosphere, showers, cooking and even breathing move back and forth through the walls and ceiling. Those of you in humid areas may lose half of your R-value with fiberglass or cellulose insulation.

Fiberglass is assigned an R-value of 3 to 3.5 per inch. Remember it will only achieve this number in a zero moisture and zero wind environment. Fiber insulation placed in an improperly sealed house will allow wind to blow through it as if there were no insulation at all. In the event of flooding the R-value goes to zero. Even small amounts of moisture will cause a dramatic drop in fiberglass and cellulose insulation's R-value. The question you should ask Mr. or Ms. Fiberglass and Cellulose is, "What is your R-value in my real-world environment?

U.S. Department of Energy: "The R-value of some insulations also depends on...moisture accumulation."

Insulation For Less Reviews - Some review sites are pay to play :( 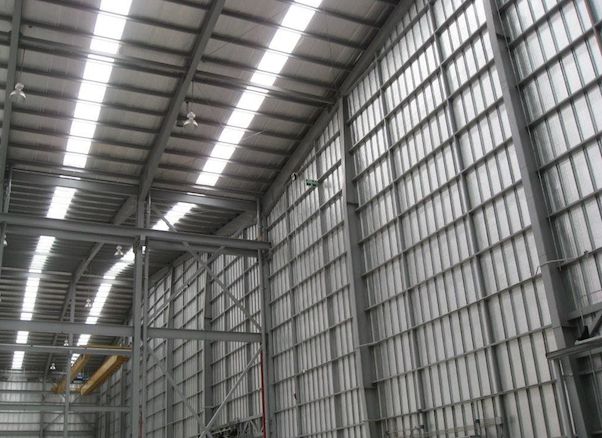 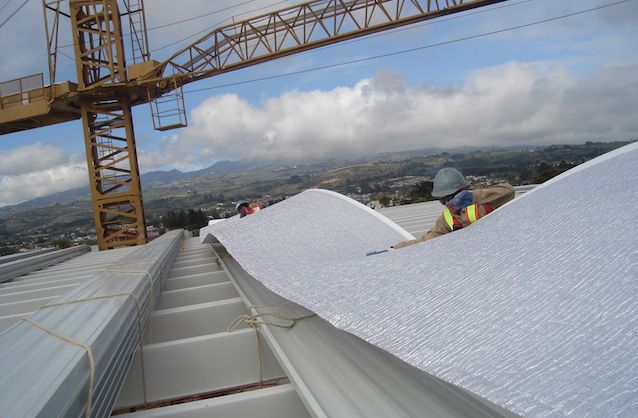 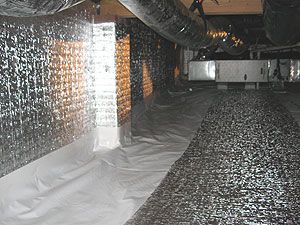 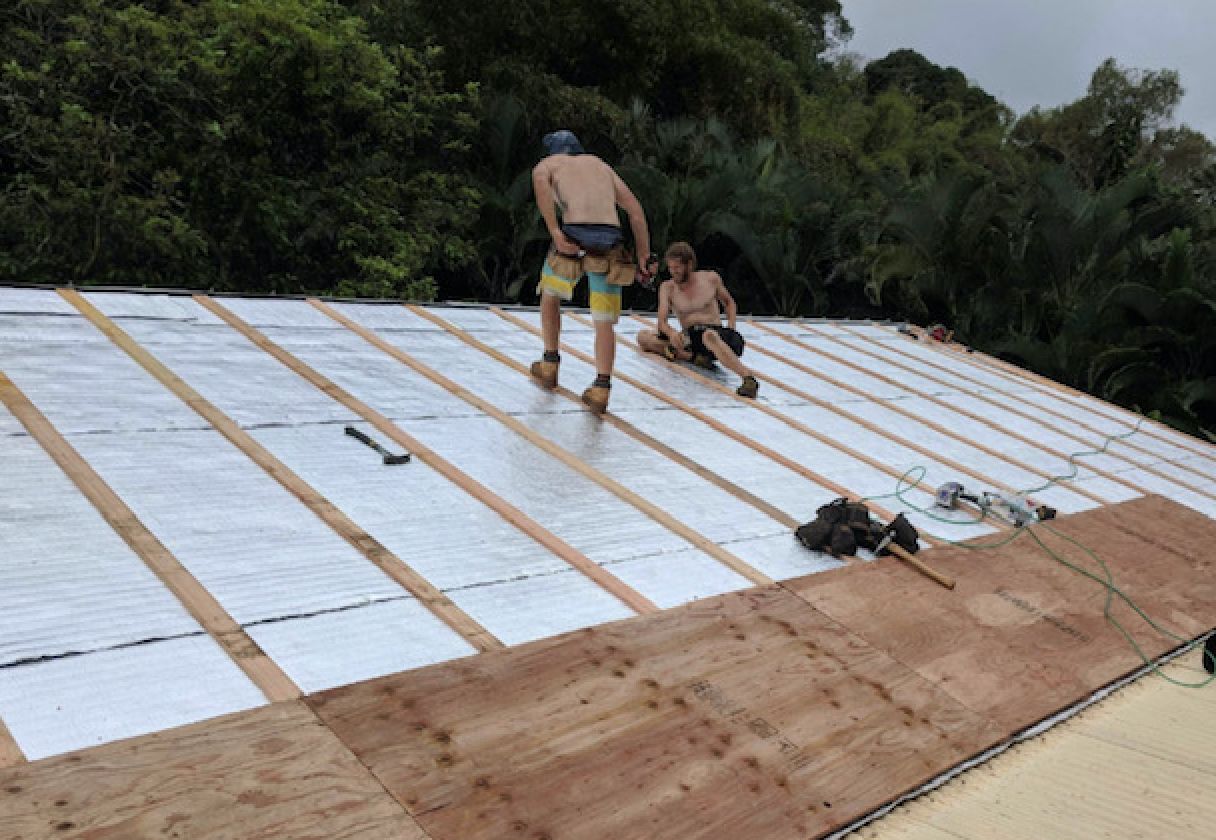 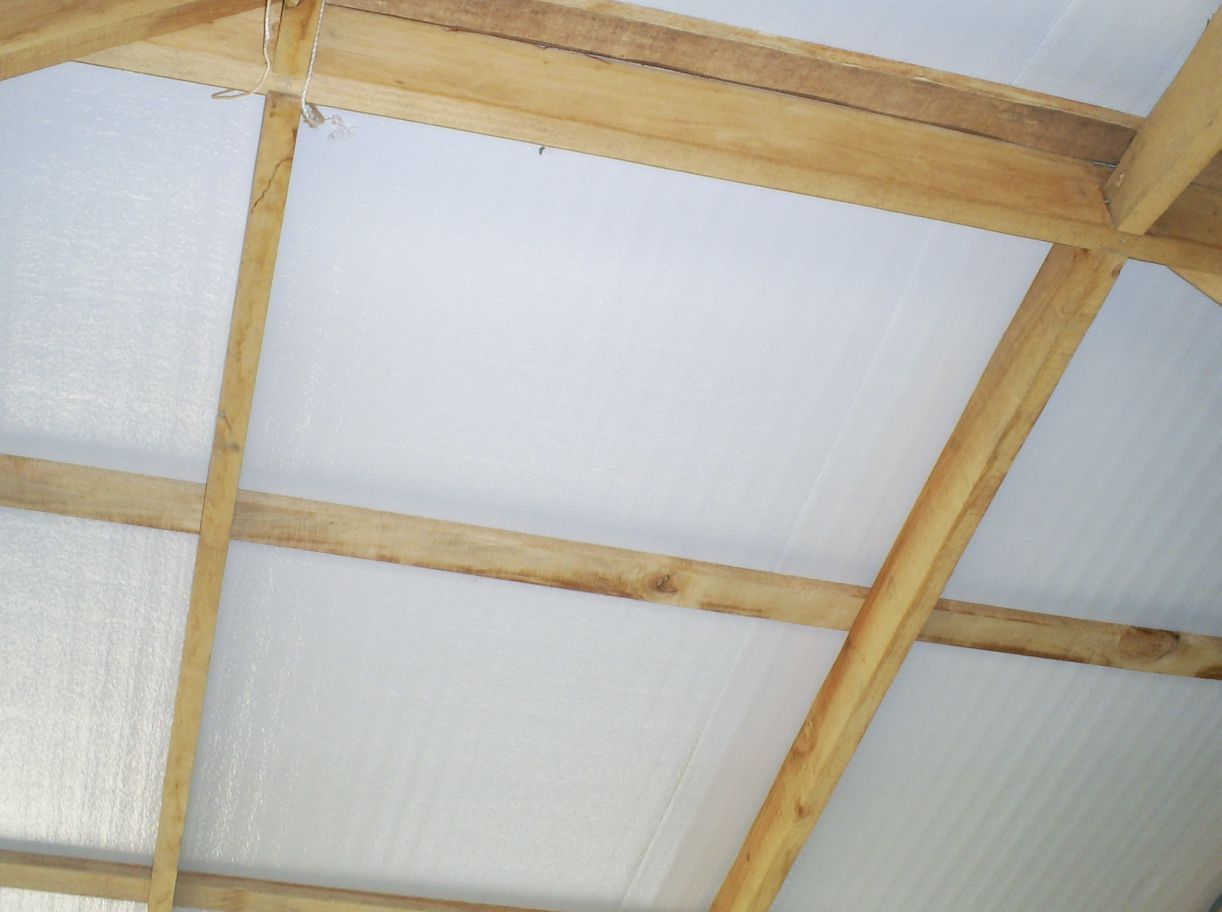 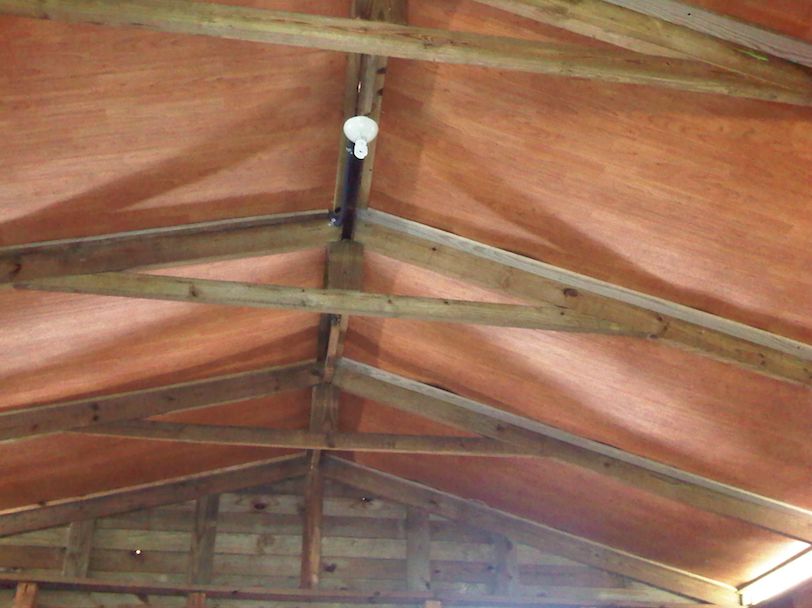 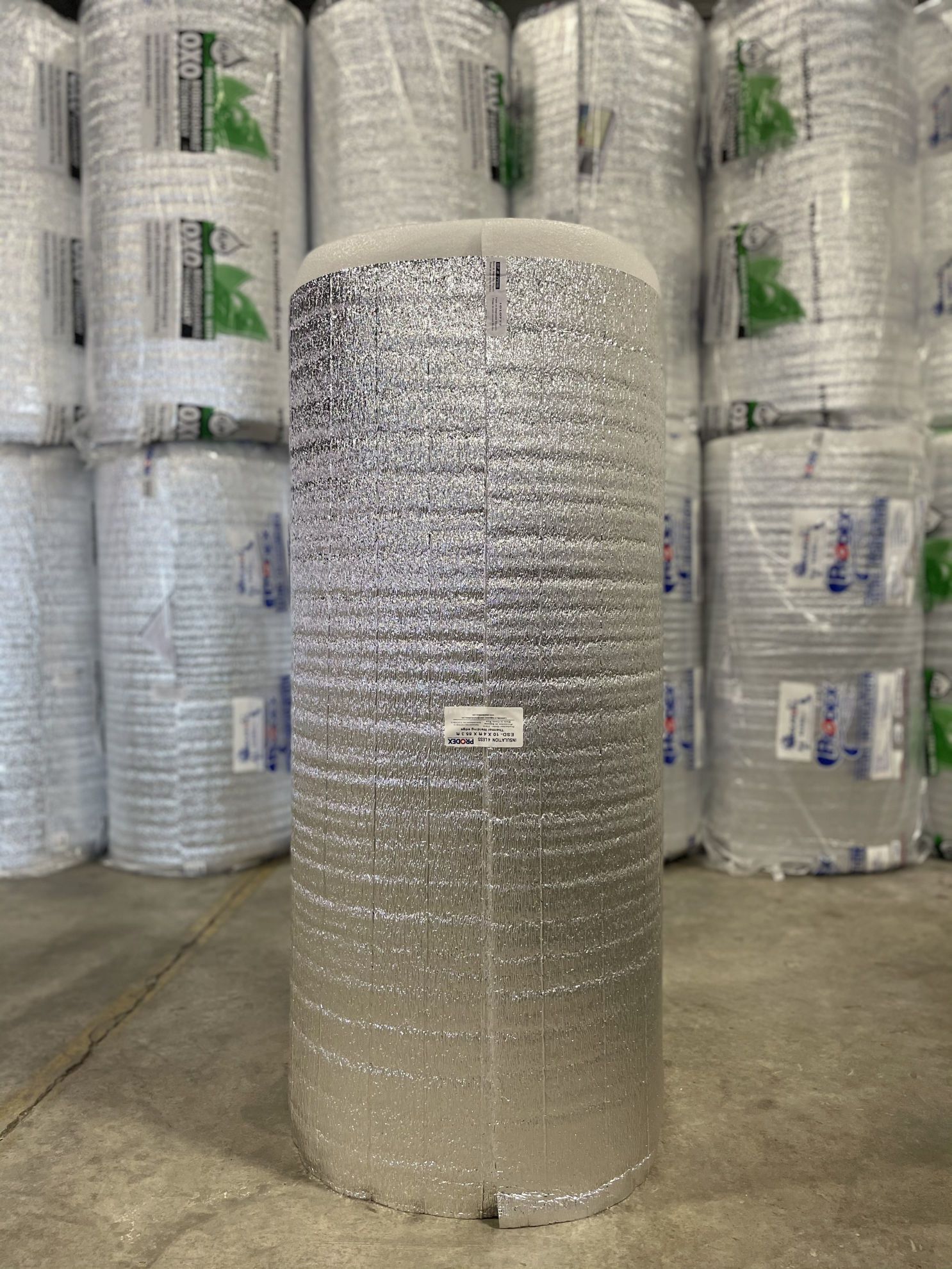 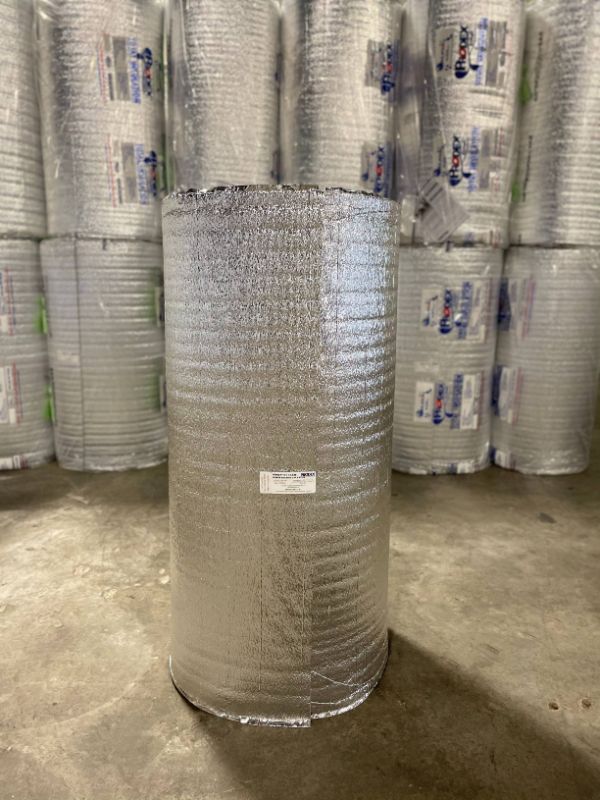 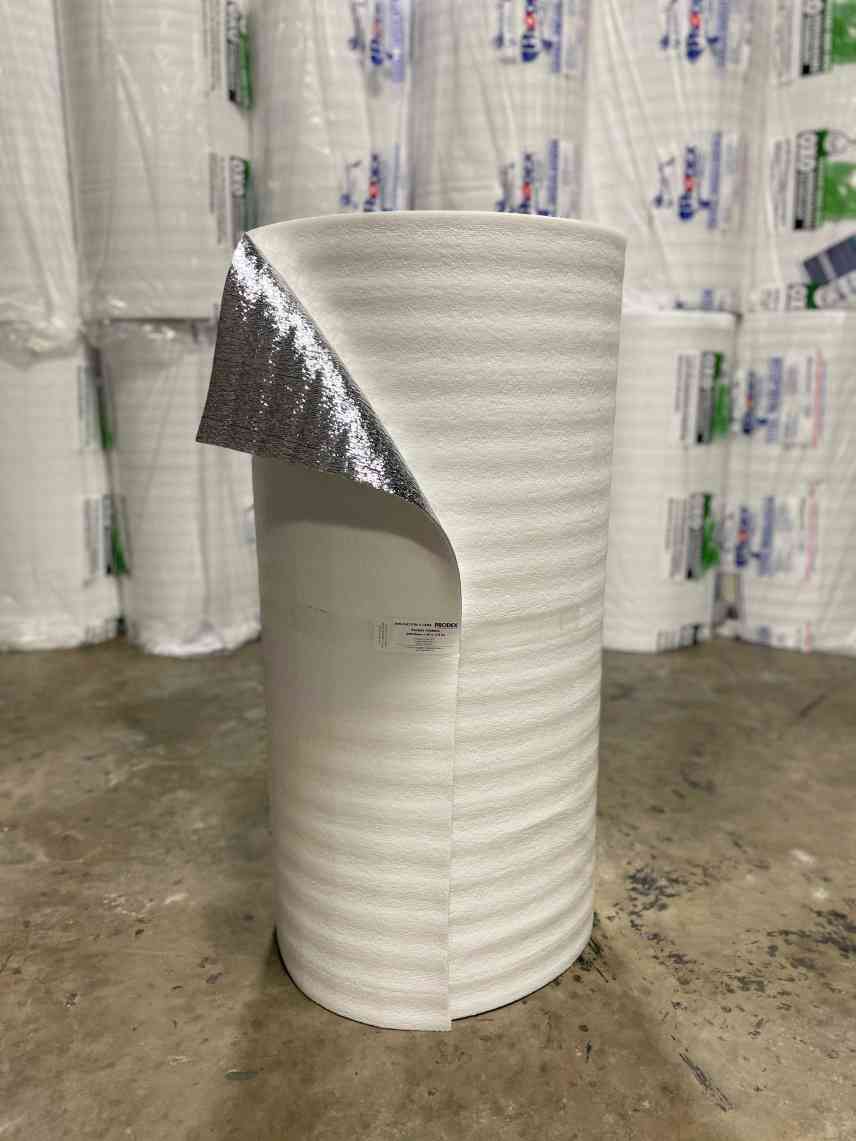 Thickness: 5mm (0.2") closed cell polyethylene foam with reflective reinforced foil on one side and plastic white finish film on the other side. Ideal where white finish is preferred. 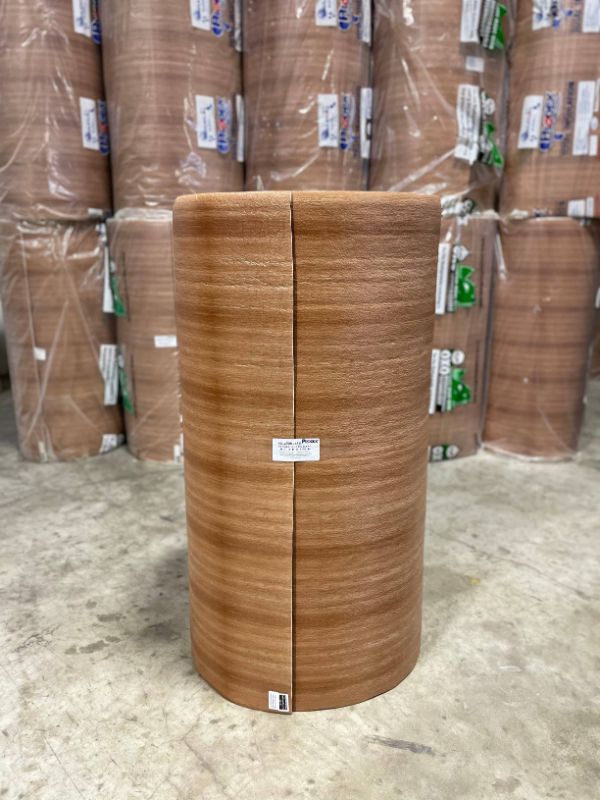 Thickness: 5mm (0.2") closed cell polyethylene foam with reinforced foil on one side and wood finish facer on the other side. Decorate while you insulate. 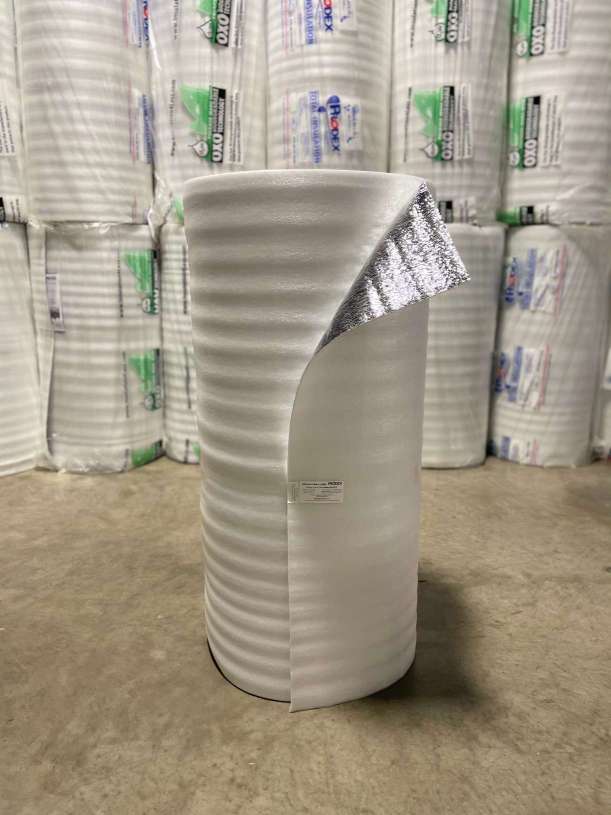 Thickness: 5mm (0.2") closed cell polyethylene foam with reflective on one side. 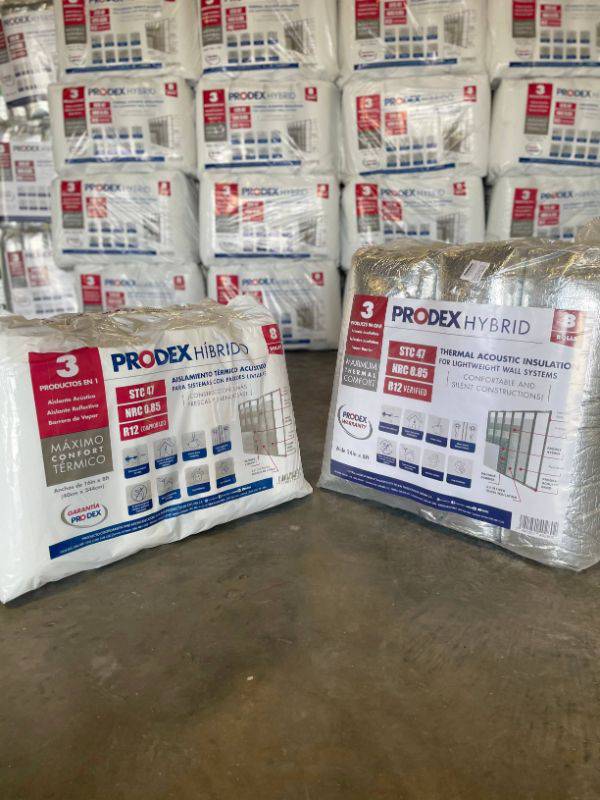 A must have metal building insulation and vital component in a complete house insulation system. If you select fiberglass for your metal building or pole barn insulation, you will have moisture issues (typically hidden behind facing), Loss of R-value (consequence of the moisture) and radiant heat gain from the sun.

Cool In Summer - Warm In Winter - Dry All the Time 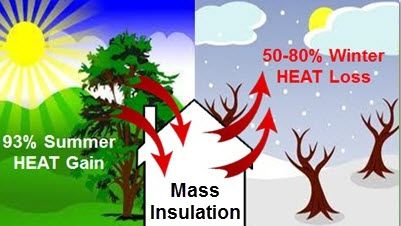 ALL IN ONE PRODUCT! 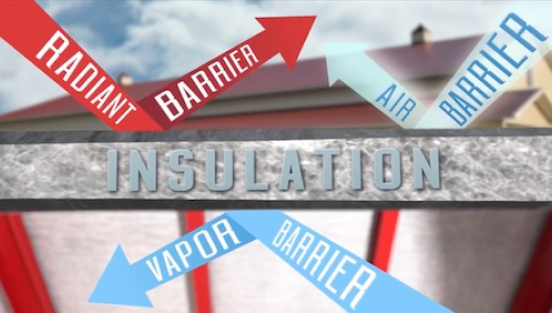 Dear Insulation4Less,
I insulated a 40 year old steel building which had minimum 3 inch fiberglass under the steel. It is a difficult retro fit - this product worked well, easy, and gained at least six inches of dead air insulation. How well the reflective component works is hard to tell, but the light reflection inside is a great added benefit. The coldest part of the winter was over before I insulated. Still, the difference in the comfort and fuel use is dramatic.

The Physics of Foil - 3 Modes of Heat Transfer

There are three modes of heat transfer: CONDUCTION, CONVECTION, and RADIATION (INFRA-RED). Of the three, radiation is the primary mode; conduction and convection are secondary and come into play only as matter interrupts or interferes with radiant heat transfer. As matter absorbs radiant energy, it is heated, develops a difference in temperature, and results in molecular motion (conduction in solids) or mass motion (convection in liquids and gas).

All substances, including air spaces, building materials, such as wood, glass and plaster, and insulation, obey the same laws of nature, and TRANSFER heat. Solid materials differ only in the rate of heat transfer which is mainly affected by differences in: density, weight, shape, permeability and molecular structure. Materials which transfer heat slowly can be said to RESIST heat flow.

CONDUCTION is direct heat flow through matter (molecular motion). It results from actual PHYSICAL CONTACT of one part of the same body with another part, or of one body with another. For instance, if one end of an iron rod is heated, the heat travels by conduction through the metal to the other end; it also travels to the surface and is conducted to the surrounding air, which is another, but less dense, body. An example of conduction through contact between two solids is a cooking pot on the solid surface of a hot stove. The greatest flow of heat possible between materials is where there is direct conduction between solids. Heat is always conducted from warm to cold; never from cold to warm, and always moves via the shortest and easiest route.

In general, the denser a substance, the better conductor it is. Solid rock, glass and aluminum, being very dense, are good conductors of heat. Reduce their density by mixing air into the mass and their conductivity is reduced. Because air has low density, the percentage of heat transferred by conduction through air is comparatively small. Two sheets of aluminum foil with about one inch of air space in between weigh less than one ounce per square foot. The ration is approximately 1 of mass to 100 of air, most important in reducing heat flow by conduction. The less dense the mass, the less will be the flow of heat by conduction.

CONVECTION is the transport of heat within a gas or liquid, caused by the actual flow of material itself (mass motion). In building spaces, natural convection heat flow is largely upward, somewhat sideways, not downwards. This is called "free convection".

For instance, a warm stove, person, floor, wall, etc. loses heat by conduction to the cooler air in contact with it. This added heat activated (warms) the molecules of the air that expand, becoming less dense, and rise. Cooler, heavier air rushes in from the side and below to replace it. The popular expression "hot air rises" is exemplified by smoke rising from a chimney or cigarette. The motion is turbulently upward, with a component of sideways motion.

Convection may also be mechanically induced as by a fan. This is called "forced convection"

RADIATION is the transmission of electromagnetic rays through space. Radiation, like radio waves, is invisible. Infrared rays occur between light and radar waves, (between the 3 - 15 micron portion of the spectrum). Henceforth, when we speak of radiation, we refer only to infrared rays. Each material whose temperature is above absolute zero (–459.67 °F) emits infrared radiation including: the sun, icebergs, stoves or radiators, humans, animals, furniture, ceilings, walls, floors, etc

All objects radiate infrared rays from their surfaces in all directions, in a straight line, until they are reflected or absorbed by another object. Traveling at the speed of light, these rays are invisible and they have NO TEMPERATURE, only energy. Heating an object excites the surface molecules, causing them to give off infrared radiation. When these infrared rays strike the surface of another object, the rays are absorbed, and only then is heat produced in the object. This heat spreads throughout the mass by conduction. The heated object then transmits infrared rays from exposed surfaces by radiation if these surfaces are exposed directly to an air space.

The amount of radiation emitted is a function of the EMISSIVITY factor of the source's surface.

EMISSIVITY is the rate at which radiation (EMISSION) is given off. Absorption of radiation of an object is proportional to the absorptive factor of its surface, which is the reciprocal of its emissivity

Although two objects may be identical, if the surface of one were covered with a material of 90% emissivity, and the surface of the other with a material of 5% emissivity, there would be a drastic difference in the rate of radiation flow from these two objects. This is demonstrated by comparison of four identical, equally heated iron radiators covered with different materials. Paint one with aluminum paint and another with ordinary enamel. Cover the third with asbestos and the forth with aluminum foil. Although all have the same temperature, the one covered with aluminum foil would radiate the least [lowest (5%) emissivity]. The radiators covered with ordinary paint or asbestos would radiate most, because they have the highest emissivity (even higher than ordinary iron). Painting over the aluminum paint or foil with ordinary paint changes the surface to 90% emissivity. Materials whose surfaces do not appreciably reflect infrared rays, such as paper, asphalt, wood, glass and rock, have absorption and emissivity rates ranging from 80% to 93%. Most materials used in building construction like brick, stone, paper, and so on, regardless of their color, absorb infrared radiation at about 90%. It is interesting to note that a mirror of glass is an excellent reflector of light but a poor reflector of infrared radiation. Mirrors have about the same reflectivity for infrared as a coating of black paint.

The surface of aluminum has the ability NOT TO ABSORB, but REFLECT, 95% of the infrared rays which strike it. Since aluminum has such a low mass to air ratio, very little conduction can take place, particularly when only 5% of the rays are absorbed.

In order to retard heat flow by conduction, walls and roofs are built with internal air spaces. Conduction and convection through these air spaces combined represents only 20% to 35% of the heat which passes through them. In both winter and summer, 65% to 85% of the heat that passes from a warm wall to a colder wall or through a ventilated attic does so by radiation.

The value of air spaces as thermal insulation must include the character of the enclosing surfaces. The surfaces greatly affect the amount of energy transferred by radiation, depending on the material's absorptivity and emissivity, and are the only way of modifying the heat transferred across a given space. The importance of radiation cannot be overlooked in problems involving ordinary room temperatures.

The following test results illustrate how heat transfer across a given air space may be modified. The distance between the hot and cold walls is 1 1/2" and the temperatures of the hot and cold surfaces are 212 degrees and 32 degrees respectively. In CASE 1, the enclosing walls are paper, wood, asbestos or other material. In CASE 2, the walls are lined with aluminum foil. In CASE 3, two sheets of aluminum are used to divide the enclosure into three 1/2" spaces.

Reflection and emissivity by surfaces can ONLY occur in SPACE. The ideal space is any dimension 3/4" or more. Smaller spaces are also effective, but decreasingly so. Where there is no air space, we have conduction through solids. When a reflective surface of a material is attached to a ceiling, floor, or wall, that particular surface ceases to have radiant insulation value at the points of contact. Therefore, care must be exercised, when installing FOIL INSULATION, that it be stretched sufficiently to insure that any inner air spaces are properly opened up and that metal does not touch metal. Otherwise, conduction through materials can occur.

Ask a question about this product?